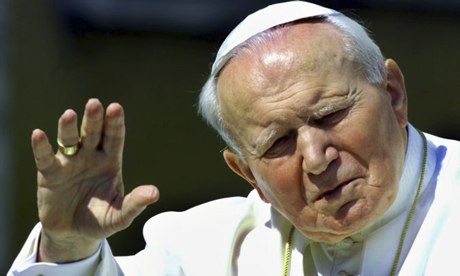 Pope John Paul II in 2001. The church was given some of the late pontiff’s blood in 2011 as a sign of his love for the mountainous region. Photograph: Paolo Cocco/Reuters

Thieves broke into a small church in the mountains east of Rome over the weekend and stole a reliquary with the blood of the late Pope John Paul II.

A custodian, Franca Corrieri, said she had discovered a broken window early on Sunday morning and had called the police. When they entered the small stone church they found the gold reliquary and a crucifix missing.

John Paul, who died in 2005, loved the mountains in the Abruzzo region of Italy. He would sometimes slip away from the Vatican secretly to hike or ski there and pray in the church.

Polish-born John Paul, who reigned for 27 years, is due to be made a saint of the Roman Catholic church in May, meaning the relic will become more noteworthy and valuable.

In 2011, John Paul’s former private secretary, Cardinal Stanislaw Dziwisz, gave the local Abruzzo community some of the late pontiff’s blood as a token of the love he had felt for the mountainous area.

It was put in a gold and glass circular case and kept in a niche of the small mountain church of San Pietro della Ienca, near the city of L’Aquila.

Corrieri said on Monday the incident felt more like a kidnapping than a theft. “In a sense, a person has been stolen,” she said.

She said she could not say if the intention of the thieves may have been to seek a ransom for the blood.

Apart from the reliquary and a crucifix, nothing else was stolen from the isolated church, even though Corrieri said the thieves would probably have had time to take other objects during the night-time theft.

Some of John Paul’s blood was saved after an assassination attempt that nearly killed him in St Peter’s Square on 13 May 1981.