Fr Frankie Mulgrew was once so depressed he used to watch EastEnders for relief. Then he learned how to relish the divine sense of humour 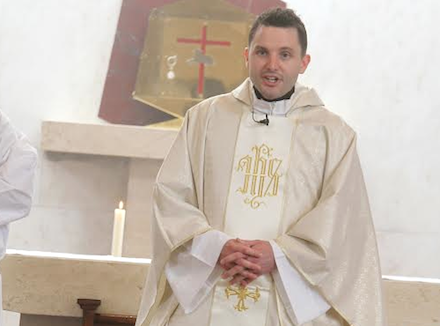 “God made us for joy. God is joy, and the joy of living reflects the original joy that God felt in creating us” Blessed John Paul II

The day before my ordination last summer I was giving my four-year-old nephew a lift in the car. I wanted to test him, so I said: “Tristan, what’s happening tomorrow?” He said: “Uncle Frankie, you’re being ordained.”

I was surprised. I thought: four years old and he knows terminology like that. This kid’s a genius. Then I said: “And Tristan what happens when I am ordained?” He said: “You become a priest.”

I thought: that’s two out of two. I need to go for the third and final question, so I said: “And Tristan, what do priests do?” And he said: “They wear dresses!”

I’ve put the cause for his canonisation on hold, but it certainly made me laugh out loud! I’m a Catholic priest with a background in stand-up comedy, so maybe it was only natural that I should be inspired to bring the two worlds together in a book. Does God LOL? has contributions from comedians including Ken Dodd, Tim Vine, Ricky Tomlinson, Jo Brand and Milton Jones. The idea must have originated in my background since as I’m from not only a traditional Irish Catholic background but also a deeply rooted showbusiness background. If I hadn’t gone into the priesthood, it probably would have been Riverdance.

When I was in comedy it was a great privilege to make people laugh. I mainly used props. I would look at the audience and say: “If the corkscrew hadn’t been invented would Australians look like this?” Then I would put on an Australian hat with the bottles still attached to their corks. Seeing people happy and enjoying themselves brings great joy – even on the nights when it is not going all that well. Once I was heckled with the line: “Get off!” To which I replied: “I’m sorry, sir, I don’t do requests.”

A few weeks ago my youngest sister Katie got married. She’s a comedian and so is my dad. He is the comedian Jimmy Cricket. After the speeches, one comedian commented on how we were all enjoying one another’s banter and good humour. “Your family were raised on laughter,” she said. Joy begets joy. Laughter begets laughter and surely God would not have given us this great gift if he wanted us all to be miserable.

You may ask why I decided to write a book called Does God LOL? (LOL, of course, is internet slang for Laugh Out Loud,) My response would be: “Because God is fun.” For example, Jesus appears and announces the Kingdom of God is like a great wedding feast. How many wedding feasts have you been to that are boring and dull? Jesus said that he had come to give life in abundance (Jn 10:10).

Surely abundant life is not possible if you celebrate all the attributes of being human but leave out smiling and laughter. In his apostolic exhortation Evangelii Gaudium (“The Joy of the Gospel”) Pope Francis comments that an “evangeliser must never look like someone who has just come back from a funeral”.

During some of the most difficult times of my life – some personal and others while assisting those going through hard times – a laugh or a smile has been a sign of hope that a brighter day is ahead, that amid tragedies and loss there is light, in a joy that is heaven-sent.
I mention in the book a true story about a young man with cerebral palsy. He was a Catholic, but because of his condition whenever the time came for him to receive Holy Communion he could not open his mouth. The priest realised that the only way he could get him to open his mouth was to tell him a joke and make him laugh. While he was laughing the priest was able to give him Holy Communion. I love that story because it tells us that under such special circumstances God came to that young man at such a sacred moment with the aid of laughter and joy.

A recurring theme throughout the scriptures is that those who have God have joy. An evidential sign that any person from the Bible has the Spirit of God within them is great joy matched with inner peace. Regardless of ever-changing circumstances around them they have an underlining peace and joy that no person, place or thing can take away from them. I would have to agree: that has certainly been my experience, as a former sufferer of depression. I’ll tell you how bad my depression was: I used to watch episodes of EastEnders as an antidepressant.

In the Our Father we have the line: “Your will be done on earth as it is in heaven.” From the advent of Jesus and ever since, the Kingdom of Heaven has been breaking into the world, becoming more and more present – dependent on how open we are to it – revealing itself bit by bit. We see this, in glimpses of heaven on earth, of things now on earth as they will be for all time in heaven: acts of love, kindness and so on. It is my belief that when we laugh, from an innocent and integral source, that laughter is a glimpse on earth of the happiness we will feel for all time in eternity. That’s fundamentally where the inspiration for this book came from. I wanted to explore where this gift – all this laughter and the ability to create happiness – comes from. It’s not a book written by theologians and philosophers. That’s been done. But the idea was to have it written by comedy’s foot soldiers, the laughter-makers who day in and day out see their vocation in life as bringing happiness and joy into people’s lives. As Thomas Merton expressed it: “Comedians and clowns are likely to have a high place in heaven because they must be near to the heart of God.” The hope in the book is that we will try to get nearer to understanding God’s humour through his different faces in the world.

Comedians are experts in realising that a sense of humour also helps us laugh at ourselves when we begin to take ourselves too seriously. Surely God had that in mind too: the gift to laugh at one’s self. There is a true story that I mention in the book. It concerns a bishop who goes to visit a priest in his diocese one Sunday for Mass. The priest gets up to preach the homily and begins by saying: “I’m in love with another’s man’s wife!” The congregation gasps. The Bishop gasps. And the priest goes on to say: “I’m in love with another’s man’s wife… I’m in love with my mother.” And then he continues with a homily about unconditional love, while the bishop sits there marvelling at the ingenious way the priest had begun his homily. A few weeks later the bishop himself has to give a homily on unconditional love. He thinks to himself: “I’ll begin it in the same way as that priest did.” He stands up in the pulpit and announces: “I’m in love with another man’s wife.” The congregation gasps. And then his mind goes blank. He has forgotten what comes next. Then he says into the microphone: “For the life of me I can’t remember who it is now.” And then he says: “Wait, I’ve got it! It’s a priest in my diocese: it’s his mother!”

I miss the camaraderie from other comedians now that I am not doing stand-up anymore. It was always such fun, bouncing off one another with jibes and funny quips backstage in the dressing room. There was always the feeling of being all in this together. Whether it was a great crowd or a tough crowd, we were helping each other through. I remember once being really nervous. It was my first time performing at an open spot at the Comedy Store. A well-known comedian picked up on my nerves and gave me a friendly pep talk. It was as if he were my personal coach and I was going out there to run my personal best.

It was always fun and inspiring to journey and converse with the different comedians. Some of the contributors to the book were personal friends, while some were acquaintances. Others we just pitched cold, in the hope that they would contribute – and they did. The book also features the work of leading cartoonists who answer the title question through illustrations.

Giving the authorship profits from Does God LOL? to my favourite children’s charity, Mary’s Meals, has been an added incentive, both to the contributors and to me. A charity named after Our Lady that helps to feed and educate more than 800,000 children a day in the developing world and which tries to guarantee that 93p out of every £1 goes to the front line has to be a worthy cause.

So the book contains a rich tapestry of personal reflections and accounts of faith, interspersed with funny anecdotes, as the comedians share the ways in which they interpret God’s sense of humour. They also express their understanding of how faith, Scripture and signs in the world can point to God laughing out loud. According to professional laughter-makers, God is interested in our happiness. As C S Lewis put it: “Joy is the serious business of heaven.”